Daryn Clark of Homer, Louisiana, was 50 years old when he was diagnosed with gliomatosis cerebri – one of the few adults to develop this rare brain tumor, which is more common among children, adolescents and young adults. His story is told here by his daughter Kathleen Clark, who has become an outspoken advocate for brain tumor awareness and research. 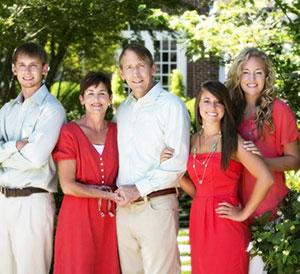 My family was forever changed on June 15, 2012.  My dad, a fifth-degree black belt, was waiting for his special Friday afternoon karate class to begin when he suddenly had a grand mal seizure. Dad was rushed to a small local hospital, where he had a CT scan and then was quickly transferred to larger hospital in Shreveport, an hour from our home. Thus began a two-week odyssey: He had multiple CT scans and MRI scans, a spinal tap, a PET scan and a brain biopsy, but doctors had no idea what was wrong with him. My dad was sent home the day before his 50th birthday without a diagnosis, and told to come back in two weeks for another MRI.

My mom immediately made an appointment with M.D. Anderson Cancer Center in Houston, Texas, because the neurologist in Shreveport thought that he might have primary central nervous lymphoma. And whatever was going on, something was terribly wrong: Dad’s behavior and demeanor had undergone significant changes since his first seizure. This was not the same man who had left for his karate class two weeks earlier.

We went to Houston the following week for Dad’s appointment with a lymphoma specialist, who scheduled Dad for yet another MRI. In the meantime, the biopsy slides were to be sent to M.D. Anderson for further review.

Ten days later we drove back to Houston for the scheduled MRI.  When we met with the neurosurgeon the next morning, he told us that the biopsy slides indicated that my dad had a late Grade III or IV gliomatosis cerebri. He couldn’t be sure about the exact grade until another biopsy was performed. Our worst fears were confirmed shortly afterward, when we were told that my dad’s tumor was a Grade IV gliomatosis cerebri.  We were told in a very compassionate manner that there was no cure. The treatment available would prolong his life for 12 to 18 months so that we could get our affairs in order.

My mom made the decision for Dad to undergo six weeks of full-brain radiation along with a concurrent low oral dose of Temodar.  After those six weeks, there was a four-week break from everything. Treatment then resumed with a higher dose of Temodar along with Avastin infusions.  These continued until about a month before my dad’s death. 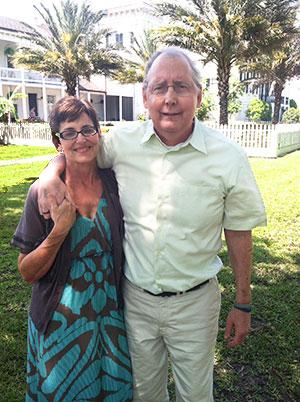 We will never know if my dad had noticed anything suspicious happening with his body before he had that seizure, as he never mentioned anything.  In hindsight, my family had noticed my dad acting differently at times, but there was nothing to alarm us.  We were completely blindsided by his seizure and subsequent diagnosis.

My father was never the same after that first seizure on June 15. He became immediately dependent upon my mom for everything. Dad went from being an extremely successful business owner and karate black belt to someone incapable of making adult decisions. His ability to communicate was immediately affected, and we were robbed of having meaningful conversations with him.  We used to playfully tell him that he was Daryn 2.0, but it was very difficult seeing someone so capable lose all of his independence.

Dad lived almost exactly 12 months from the date of his diagnosis.  We were very fortunate that he did not lose his mobility until about a month before his death, when he was placed under the care of hospice.

I decided early on that I wanted to make a difference. This is a very rare and aggressive type of brain cancer. My web site What’s YOUR Fight? is dedicated to raising funds and awareness for this little-known cancer.  I have teamed up with Elizabeth’s Hope and the Children’s Brain Tumor Project with the intent of further advancing the medical community’s knowledge of brain cancer.

Find out how you can help in the research effort

Giving Enroll in the Registry